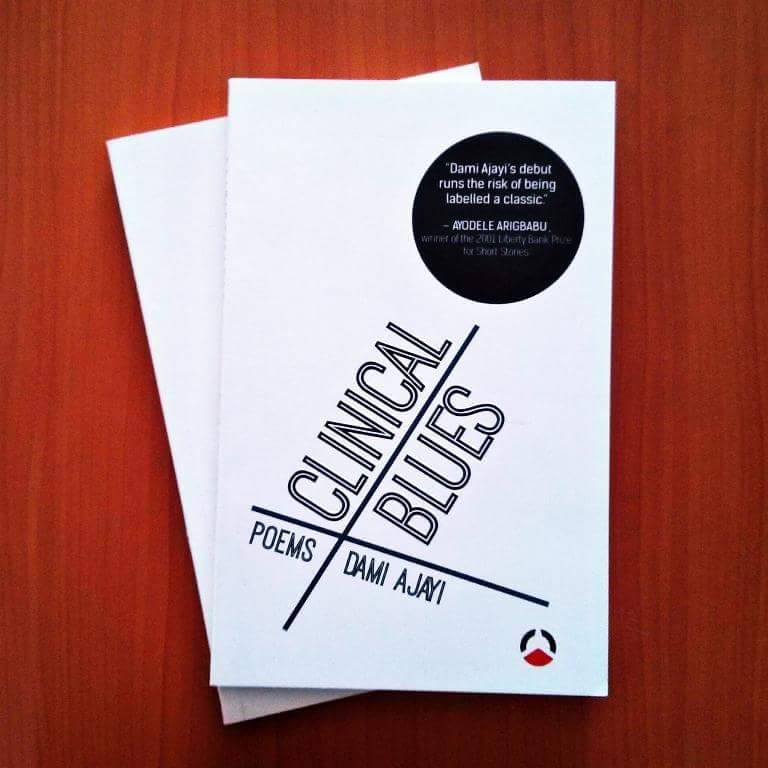 There was a compelling need for me to do a review of Dami Ajayi’s poetry when I initially got a copy, only for me to end up spending all the time enjoying the book. I have to make this confession from the beginning in order not to lapse back to enjoying Clinical Blues instead of writing up my thoughts on the debut collection published by Dami Ajayi, a committed poet very much after my heart and head. As we all know, reading is enjoyment while writing is suffering!
Even at a very young age, Dami Ajayi is a much-anthologized poet. His works have made eminent appearances across the continents, and he fittingly holds his ground matching metaphor for metaphor with renowned poets across the globe in distinctive anthologies. It was an encounter of an early poem of his entitled “Dreams Die in Ekwulobia”, I believe, that struck a chord within me. The town Ekwulobia comes straight out of my local government area, Aguata, in Anambra State. Incidentally, the poet signs off his Acknowledgements page of Clinical Blues thusly: Dami Ajayi, Ndiowu, Anambra State, April 2013. The bonding of Dami Ajayi and my home state of Anambra was enough to put my curiosity in overdrive such that I factored the young poet as a kind of inspired troubadour traversing the landscape and dreamscape to commune with Christopher Okigbo, the patron saint of the land of the waters of Mother Idoto. As if to cap it all up, I found out that Dami studied Medicine at Great Ife where I had been many crescent moons earlier.

Clinical Blues is divided into three broad sections, namely Love Poems, Hospital Poems, and Barroom Reflections. Even so, the entire collection can be enjoyed seamlessly without any divisions whatsoever for Dami Ajayi is, at bottom, a poet of passion. Many medical doctors across the centuries have staked distinguished claims in the hall of fame of permanent poetry. Like America’s Williams Carlos Williams, the medical doctor and poet who expanded the boundaries of Modernism and Imagism, Dami Ajayi is poised to extend frontiers with his lines and cantos.

“Glossolalia”, to wit, the gift of speaking in tongues, is a word that makes its presence felt in aspects of Dami Ajayi’s poetry. We are dealing here with the fervor of poetic consecration beyond the seizures of the Pentecostal blend. For Dami, poetry represents the essence of life itself, a call farther and deeper than the accident of affectation. His poet’s eyes are as ever alert roving the universe, espying all subjects and themes and styles. Inspired wordplay lends to unplumbed meanings as in “Promenade”:

Serenade is not lemonade,
This citrus tinge that bites
My tongue is penance.
I count my blessings
With my bleeding tongue.

The here and now meet with the otherworldly in the grand sweep of images that inform Dami Ajayi’s poetry. The musician Victor Olaiya is ready grist to the mill, a range that intervolves popular fiction characters such as Miss Blandish in James Hadley Chase’s 1949 first thriller, No Orchids for Miss Blandish. Well situated within the ambit of his Yoruba ancestry, Dami Ajayi can do the Bata dance as well as highlife before incorporating the wilder fields of Back America together with the hip and contemporary modes of Yahoo Messenger, Blackberries and the Android. Amid all the diverse worldly pulls and concerns, the poet is down home with a loaded question:

Aren’t love poems love letters
Written in the hieroglyphics
Of the soul?

The love interest in many a poet manifests as the Muse of desire. In the poem “Love Songs” the invocation goes to “Your Eliotness” whose royalty interweaves Proust, Homer, Plutarch, only to pop up thus: “You are an iPod”.
Dami Ajayi’s umbilical cords go far back to older poets of the wide world, Africa and his native Nigeria, for as TS Eliot wrote in his influential 1919 essay, “Tradition and the Individual Talent” there is the general fate thus: “What happens when a new work of art is created is something that happens simultaneously to all the works of art that preceded it.”
In the title poem “Clinical Blues” the vast phalanx of the poet’s worlds come together in intriguing lines forged on parallax notes:

The blip of an ailing heart
Tolls a symphony of symptoms
But I am no open chest surgeon
For I am a jazz pianist
With a little stint with blood.

Science and religion are deftly juxtaposed in Dami Ajayi’s field of vision where, depending on one’s belief, God is – or not – the answer to all things. In dealing with the synonym or the antonym, as the case may be, one is called forth to understudy the “Upper Room glossolalia”:

This room, of such a Spartan preserve
To have made Hippocrates proud,
Shifted across centuries and instances,
And hardly changed.

The poet may be likened to the quintessential Renaissance man, very much at home in diverse fields. In the poem “A Libretto for Fela” Dami Ajayi waxes lyrical with the legendary musicians prolific output, notably “Everything Scatter, Waka Waka, Undeground System, Zombie, Let’s Start, Ikoyi Blindness, Trouble Sleep, Shuffering and Shmilling, Lady, Look and Laugh, Unknown Soldier, Overtake Don Overtake Overtake.” Like Fela Anikulapo-Kuti, Dami Ajayi subverts the quotidian milieu and order.
His best poetry throbs with verve and import. His medical training lends a measure of depth to his appreciation of being and existence. His next collection deserves to be waited for with baited breath. Dami Ajayi is a signature voice for a generation unafraid to swell the canon.