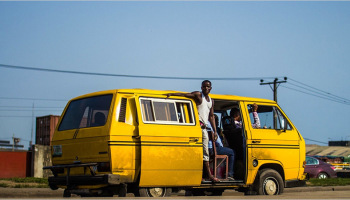 The Yoruba word ‘Agbero’ literally translates to the ‘one who receives the crowd’. Originally referring to the bus conductor (‘kondo’ for short), the ubiquitous and indispensable entities in danfos as well as in the revered molues of Lagos, the Agbero has been a fixture of bus transport for decades.

The Agbero of yore was usually a young man apprenticed to the driver to work his way up and hopefully become a driver himself someday. Sometimes, he was an elderly man atoning for a misspent youth, hustling his living from hanging from a bus.

These intrepid fellows would hang precariously from the bus, wailing out destinations, and stop along the way, in a peculiar drawl- an ancient tongue developed over years by Agbero-kind. In those old days, the distinguishing feature of the Agbero was his attachment to his master’s bus- a bond akin to that between sailor and boat. Those important Agberos hardly exist today.

But as they say, the only permanent thing is change. And the Agbero is no exception. The late 90s witnessed the ascendancy of a trend in our motor-parks; the rise of specialized characters, unattached to any particular bus. The modus operandi of these men is to collect passengers to fill a bus, then collect a fee from the driver, and on to the next bus. So the Agbero moved out of the bus, and permanently onto the motor-park grounds (and the illicit-gin sheds that litter it).

The Area-boy (from the Yoruba, ‘omo ita’) is a well known feature in Nigerian life. The mischievous, child-of-the-street motor-park tout who also serves as head-porter, pickpocket, errand-boy, in short, whatever he’s required to be. Gradually, there was a blurring of the distinction between these urchins and the Agbero. With the result that these Dickensian characters also came to be called Agbero.

So it was, that by a gradual process, ‘Agbero’ evolved to become a more encompassing term, or as used to be sung of Lagos, ‘to accept all- thief or lout.’

There, however, remains a final phylum in the evolution of our noble men of the bus.. and motorpark.. and ‘area’. The specialization, if you will, for purpose of forceful social development.

With the return of democracy arose a pressing need for henchmen, who for a stipend would be willing and able to perform acts of violence–intimidations, kidnappings, riots and murders–in furtherance of the cause of self-governance. Up stepped our worthy Agbero to fill this need and thus, the Political Agbero was born under the aegis of the Nigerian Union of Road Transport Workers.

This final group happens to be most auspicious in pecuniary terms. Many have gone on to hold political office themselves. We should also add that this group also attracts a slightly higher chance of death or serious injury. But what’s a missing eye or limb when your goal is the survival of democracy, right?

“A Quest for Sobriety”