Pointed rifles and aides flanking him

A Neanderthal in turban

He holds the world to ransom

He kills in the name of a God

Leaving this god neither anonymous,

We condemn his gore and guts

The nation has been sabotaged

And they wave a flag of indifference,

Then a flag of denial, then a flag

Of amnesty, a flag of deliberation

In the face of carnage

They die by diffusion and hope to fuck

Virgins in heavenly suites. They shout God is great.

But we already know. Man’s wickedness is greater

And God does not speak for man’s wickedness

When He called us after his image.

God is no poet; he does not fancy imagery,

He would have said: Man, look into a mirror

What you see is God.

Everyday a new death. Not famine or

Malaria, not automobile mishap or Filaria

Not old age, the good death or dying,

Not even cancer, the new worm or

Diabetes, death from being too sugary–

It is suicide motivated multiple homicides

Blast their god vehicle in a frenzied

Rant about the greatness of God.

Coalescing within the confines of

Then there was Chibok.

And the town’s name became its tragedy.

Stirring and stoking it with petrol

They made away with 234 virgins

The world was silent when they were taken

It was denied, their kidnap was first amnestic,

And  remembered in slow bursts.

Catch a fire my friend.

But who keeps the vigil lamp burning?

Who keeps the dreams drumming?

Who sits as sentry at the fish-mouth

Who keeps the memory fresh by

This poem carries every name,

Every face, every trace of tear, every

Ounce of fear that these girls suffered

They have been scarred for life

This memory may not decay

How will they remember themselves by,

In the span of days, an innocent virgin

Becomes known by a prodding terrorist

His member, his stiff ramrod

Jabbing into her with the persistent unease

And the frenzy of a house owner locked outside.

He squeals his seeds into her,

Cuddles smearing her bruised sensitive side,

This rape is dual, of mother and daughter

Bring Back Our Girls fired up

That don’t give; social media activism

Is struggle at its laziest, pundits sip tea

Retweet won’t bring back our girls,

Neither will hashtags, our voices have

Reverberated all over the world and that

Is enough for pushing our luck.

Whilst soldiers shuffle in their boots,

Dancing the feeble dance of the infirm

On the skirts of Sambisa.

Inertia is a new dance.

Inertia is a new trance

Inertia is a new prance

Inertia will not bring back our girls.

*A year has passed. We haven’t forgotten or forgiven. 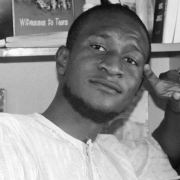 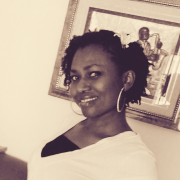