Once upon a time. I happened on a book. And I fell in love with the book. I borrow my staccato sentences from this rather quaint book. Authored by Late Hansen Ayoola, She Died Yesterday was first published in Nigeria circa 80s.

Don’t bother Google; I drew blanks when I did.

As an admission-seeking school leaver, I lived with my parents at Ibafo, a satellite town along Lagos-Ibadan expressway. Living in Ibafo was fraught with difficulties—bad roads, lack of electricity, summarily nothing from the Government for citizens (unsurprisingly, this still obtains). I was bored to death. Having exhausted all the reading material at home, I began to raid friends for books.

Idowu, my late friend, borrowed me a book. The book had no front cover, missed several pages, but I read the book nonetheless.

She Died Yesterday (SDY) is a tragic novel about an endearing male protagonist. It is a coming-of-age story told in a convoluted manner, via interrupted narratives. It is summarily about the futile pursuit of love.

Tutu is a sensitive fledgling poet from a humble beginning. He finds love in the arms of three women but he is jilted consecutively. The suicide of Bridget, his final choice, stokes his anger and unearths a long time rivalry. The protagonist who could not bring himself to slaughter a goat at the beginning of the novel butchers a man who had previously deprived him of his woman’s love at the end of the novel.

The novel is set in the south-west of an unnamed country but little is done to disguise the country’s identity as Nigeria. The said country is in a sort of democracy historically compatible with Nigeria’s Second Republic but not without the commonplace problems of corruption and prurient nepotism.

Noteworthy is the author’s profound love for staccato sentences and an unabated ease of lurching into internal monologues. This meddles with the story’s point of view. There are also historical inconsistencies that would have been raked out by a vigilant editor. For instance, the national currency was said to be Pounds and then much later, at about the same time frame, it was named as Naira.

In spite of these foibles, the story sings. I thoroughly enjoyed reading this book and I passed it around my friends till my battered coveted copy was coveted by someone else.

This happened 10 years ago.

Fast forward ten years. I am a medical intern at Wesley Guild Hospital, Ilesa. I attend the 2011 edition of the Poetry-fest hosted annually by Professor of Pharmacy and author, Adebayo Lamikanra.

A bespectacled middle-aged woman performs a moving dirge. I approach her after her reading, curious about what had inspired her poem. She tells me it was written for her late husband who was also a writer. Then she invites me to the Ijesha Book Forum which holds every third Saturday of the month at her late husband’s chambers at Ananye. 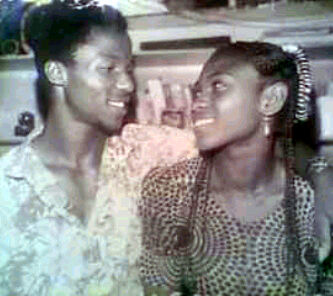 Hansen Ayoola and wife in the 80s.

One Saturday, I visited Bugbeayo chambers at Ananye. I met Gbenga, the lawyer in charge of the chambers who happened to be the middle-aged woman’s son

Unfortunately, he said the forum was not holding that day. He invited me into his father’s office which was now his.  Then he told me about how his father moonlighted as a fiction writer. His father’s first book, which had won the Delta Fiction Prize when it was published, had since gone out of print. His father had floated a publishing outfit to bring the book back, after correspondence with an Australian library to retrieve the only traceable copy of the novel. His father died from a terminal illness shortly after choosing the book cover.

I was quite intrigued by his story. I sympathized with him on his father’s death and asked after the book. He pulled a drawer and placed a book in front of me.

I smiled when I saw the title: She Died Yesterday.

Book Review: Music & All That Jatt