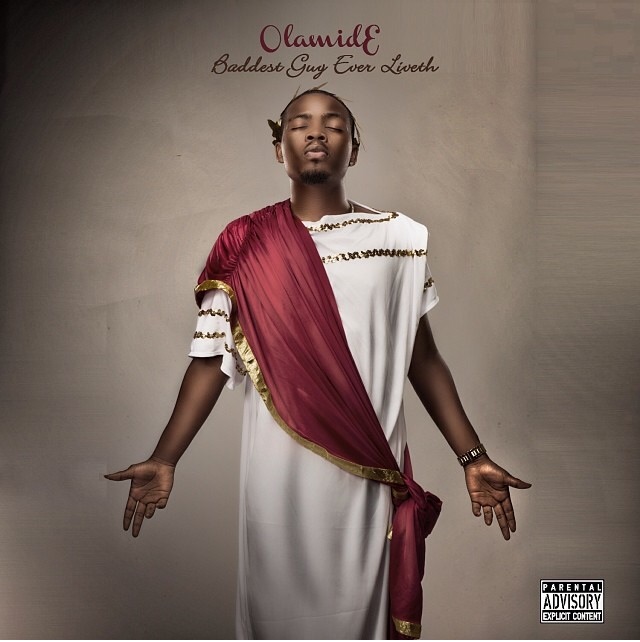 On Olamide’s third studio album cover art, Baddest Guy Liveth Ever,  he is dressed in a Roman ensemble complete with a fig leaf crown, eyes closed, drooping forearms stretched out, two fingers on each hand pointed like guns, calm face—the demeanor of  an assured  emperor.

With the untimely death of DaGrin and the unfortunate decline of Ajasa, the throne of Yoruba Hip-hop has been vacant. The good news is that there is a self-proclaimed king, Olamide, and his third L.P, released barely a year after his sophomore, is a worthy tract that legitimizes his claim.

Olamide has indeed come a long way: from his earlier stint with lukewarm radio hits and B-rated videos to phenomenal megahits and club bangers  like First of All, a song which permeated our social consciousness for  its quotidian relevance.

We had not even recovered from this onslaught to our musical aesthetics when he released Durosoke, which, like First of All, is not only hilarious but patterned with strong Yoruba inflections and idioms. Soon enough, Turn Up, another club banger was issued, then Yemi My Lover and, finally, the album unleashed, an 18 track ensemble with two skits.

Frankly, the introductory skit should be ignored, the startup song, Esupofo, is a mild-paced song showcasing Olamide’s Pentecostal roots. On his sophomore, songs like Jale were patterned after prayer songs. This makes Olamide’s music popular; it is watermarked with influences, which almost every Lagosian and South-western Nigerian can claim as theirs.

Olamide must be admired for his tendency to crowd his lyrics with Yoruba lexicon. Sometimes, it is about the special oeuvre one can bring to the table, and like 9ice, Seriki, Reminiscence, Olamide practices his musicianship in a manner that showcases the Yoruba culture to a worldwide audience.

He reflects his myriad of influences ingeniously. Songs like Anifowoshe, where he samples a KWAM 1 chorus, reflects his Fuji influence. Position Yourself reflects Soukous and Makossa playlists. The tempo and the beat on Scammer is reminiscent of Nelly’s Flag Your Wings, popular in the early 2000s. Yemi my Lover cuts through childhood memories of a certain Bollywood-esque Nollywood paranormal romantic comedy film popular in the early 90s. Even American Hip-hop is referenced on Sitting on the Throne. He quotes from Migos’s unusual hit song Versace in one of his humorous quips, Versace, Versace/You’re rocking Versace/Your mummy is hungry oloshi.

Beyond Olamide’s vernacular dexterity, his humorous lampoons, his paranoia typically of Hip-hop artists, his ability to spin unlikely hooks on demand, what is new on the table? His music still lurks in the shadow of Da Grin’s prescription of Igbo, Shayo, Ashawo. The recourse to biography for material is not original, although it is impressive. This album is a notch above his sophomore and a hilarious listening experience.