At age 9, he spat out his first sip of lager

on the face of a bewildered mum

whose response was laughter.

with some difficulty, he did not want his peers

to laugh at him.

His third sip was from the second bottle

he bought, his first fell from trembling hands

& hit the ground with a thud.

He could not remember his fourth, fifth or sixth sip;

they happened so fast, they became

& once he set the bottle to his mouth

that was where it stayed,

shaping things around him. 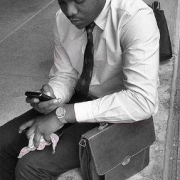