While reading Lola Shoneyin’s marvelous first novel in 2011, many things struck me about it. The supple narrative woven around monologues. The frenetic head-hopping. The wicked humor. The unabashed sensuality. And its rippling credibility. The novel happened to me in real time, cinematic save for the creaking sound of a video projector.  I wrote a review in my head with a sentence that goes something like, this novel must be staged! 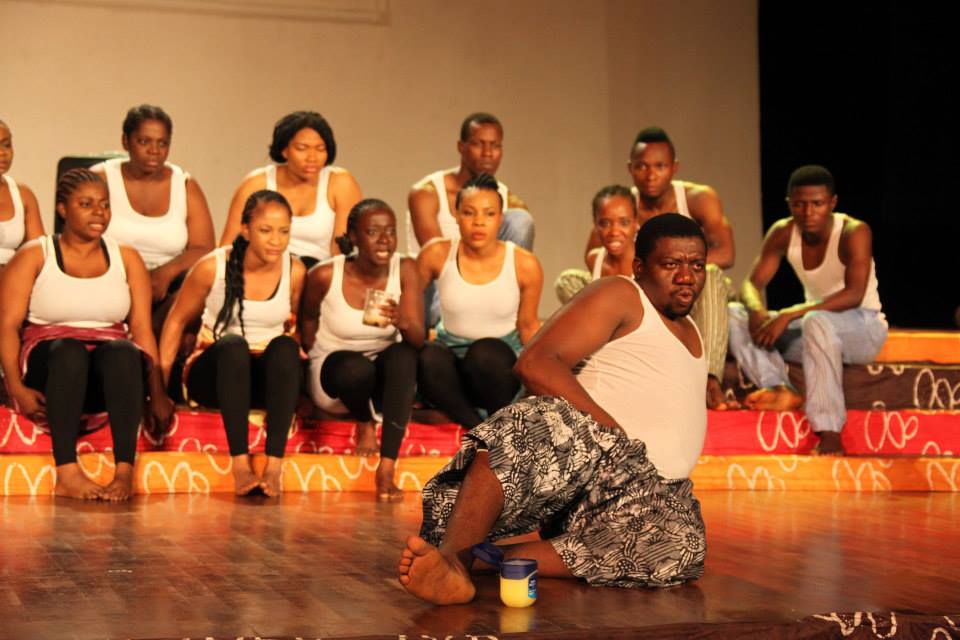 Two years later, I make it just in time to catch the opening act of a stage adaptation of The Secret Lives of Baba Segi’s Wives (TSLBSW) at the Cultural Centre, Kuto. Since this is not exactly a review, let me bore you a bit with the peculiarity of my timely arrival at Abeokuta at 8.p.m that fateful day.

I spent the night at the hospital. I woke up to a routine surgery with a hiccup that necessitated life-saving interventions. At 4 p.m, my sterile gloved hands were still inside someone’s wife’s abdominal cavity. I stared at the ticking clock and I shook my head.

At 6 p.m, Pearl and I drove into the rundown On the Run at Berger to buy my breakfast and refuel. Pearl really needs no introductions. She runs the popular blog, Fifty Shades of Me. She is also notorious for her outrageously risqué commentary on Social Media. We met Richard Ali. He was also heading down to Abeokuta in a chartered cab and had stopped for a bite. Pearl and I convinced Richard to ditch his cab driver.

At 7.30 p.m, we raced up the Shagamu Interchange and succeeded in missing our way to Abeokuta. No thanks to Richard Ali’s GPS and Pearl’s inability to navigate. Eventually, we got our bearings right and we made our timely arrival.

TSLBSW must be a tricky book to adapt for stage. It reads easily but I’m convinced that it wasn’t an easy write. It must have been carefully contemplated for the peculiarity of its theme. Polygamy, one of our patriarchal traditional endowments, still remains hugely popular. Lola Shoneyin, a consummate poet with an avian obsession, broached polygamy with feminist audacity, interrogating patriarchy with relevant characterization, resurrecting taboo subjects for public airing and stuffing us to our fill with slices of our lives.

The opening scene of the play quickly ensued with how Bolanle, a graduate, joined Baba Segi’s harem as his fourth wife. The plays happens without interruptions—fade outs, lights on, elaborate costume changes—like an avant-garde theatre propelled by economy and improvisation.

Humor became a useful tool deployed at will to grapple with taboo issues like sex, homosexuality, masturbation and even rape. Kudos must be given to Femi Elufowoju Jr., for his directorship, through which Rotimi Babatunde’s play came alive. The decision for the characters to speak with a Yoruba accent save Bolanle thoroughly worked at making her a victim of polygamy. Through Bolanle’s foreignness, often blamed on her university education, the audience is intimated on the dangers of polygamy and our patriarchal society; how it necessitates connivance and improvisation. Bolanle became the speck in the communal eye of Baba Segi’s wives whose extrication culminated in a tragedy.

The cast was terribly brilliant. The portrayal of Baba Segi as a man of his orifices is Freudian and motivated; it seemed like a response to the Baroka in Wole Soyinka’s The Lion & the Jewel. Iya Segi also came alive with her lesbian tendencies preserved and her role was well enacted, precise even to her physique; it was as if she reeled out from the book pages. I feel the character of Teacher merges rather nicely with Baba Segi’s inner voice and it might have been prudent to have left it out. Iya Femi, the disillusioned woman of Pentecostal faith, was also a delight to watch. And so was Iya Tope, the complicit “weeder”. I repeat the cast was terrific.

The choreography and songs were top-notch, paying obeisance to Yoruba tradition and folklore. Did I mention that cast was also responsible for the music? Flutes, guitars and drums made music that matched the mood. And the dance was fluid, sometimes racy. The sexual allusions in this play will make for censorship of young viewers, perhaps below the age of 13. At the climax of the sexual odyssey was Baba Segi’s masturbation which lasted about five minutes, replete with accompanying music, his suggestive facial distortions and consequent protracted laughter from the audience. Rotimi Babatunde’s religious obsession with the novel’s text paid off.

This play must travel!