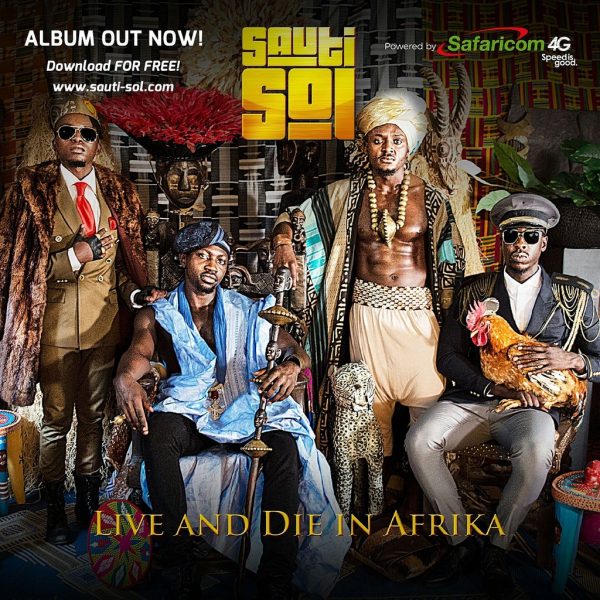 Foreword: This was written before Wakanda became mainstream.

Kenyan music, and perhaps the entire oeuvre of East Africans, is not much popular in Nigeria but if there is interest, there is internet. For those who have visited East Africa, they swear that you will hear Wizkid screaming “your bom bom is bigger than Bombay” in the wee hours of a Friday night in Kampala. I have witnessed, in a club at Westlands, how Nigerian contemporary music is the life of the party once the club moves from the lounging mood of American Hip-Hop/Urban hits to the mood of energetic African grooves.

The evening I chose to describe, sometime in September 2015, ended with catching a glimpse of a certain Kenyan male band climbing into a SUV amid a slight pandemonium of friends and fans and paparazzi famzing. No, I am not talking about Just a Band. I mean Sauti Sol.

Sauti Sol is the Kenyan Afropop band of vocalists—Bien-Aimé Baraza, Willis Chimano and Savara Mudigi—and guitarist, Polycarp Otieno with three albums under their belts. The most recent is their self-produced Live and Die in Afrika released first for limited pre-Xmas free downloads.

To find an overarching theme for their albums, is not the forte of contemporary African musicians but I find the title of this album compelling. Live and Die in Afrika. And it is not just the live and die part—which I wholly subscribe to—it is the stylized spelling of Afrika (spelt with a K). This statement is best made with the album jacket presenting the band members as subjects in different styles of African attire that brings the model African country of Hollywood, Zamunda, to mind. On the fifteen track album, the title song exists in its own class, melding influences from African as well as Indian rhythms to the song version of a utopian Pan-African philosophy.

Other songs are best grouped as love songs and non-love songs, of course with the caveat that some non-love songs are still about women. Male bands from The Temptations all the way down to (forgive my choice, please) P-Square are obsessed with the opposite sex and rightly so.

Now, first, to the Swahili songs, because they say music is a universal language. There is a visceral response to Sauti Sol’s music to the non-Swahali speaker. Nipe Nikupe with its blend of electronic tendencies with makossa/rumba rhythms is made for dance. Ditto for Sura Yako, with its seemingly alternative gospel feel. Nishike, Nerea and, of course, Kuliko Jana (featuring Aaron Rimbui) are ballads that seem to detail longing (sexual or spiritual) and misery that pokes at the soul.

The beauty of a good album is that it strives to take a listener through different moods with different songs appealing to different situations. On this count, Sauti Soul is guilty, especially appealing to an audience that came of age at the time hip-hop was transitioning into global phenomenon and contemporary African rhythms began to flirt with jazz. The effect of this watershed was cacophonous and ambiguous and Sauti Sol seems to be its poster children.

Their music is extensively derivative, layered and carrying with it influences from urban Nairobi, bollywood, electronic music, jazz, Pan-Africanist philosophy, songs from apartheid South Africa all the way down to DruHill’s Sisqo octaves.

To listen to Live & Die in Afrika goes beyond finding respite and relevance in contemporary African music, it also means to experience Nairobi where kept women like the crisp feel of dead American statesmen on the dollar bill (listen to Dollar Dollar), where you can jump to Sambo Party without a care in the world.

And of course, no description of their music must spare the way the strings weave into the core of the music (all hail Polycarp Otieno!). Sauti Sol departs from similarities with other bands, especially those based in Nigeria, in their dexterity with actual musical instruments besides the voice. There is a strong sense of understanding music in their work ethics or how else can one explain fusing Spanish influences with the hugely successful clap rhythms of Lumidee’s Never Leave You to make a song, Shake Yo Bam Bam, for shaking Bantu backsides?

I recommend that every Nigerian listener listen to Live & Die in Afrika at least once.